An internationally recognized viticulturist and wine maker, Karnail has made his biggest impression in the wine industry.

He moved to Canada in 1993 to pursue a better life for his wife, Narinder, and their future family. Originally immigrating as an Electrical Engineer, Karnail found that Canada would not recognize his degree and so he went back to his roots of organic farming. Karnail is a third generation organic farmer and he knew, with the orchards and vineyard’s in the beautiful Okanagan, that he would be able to make the land and fruits it produced completely organic and one with nature.

Karnail has worked with various wineries in the Okanagan, he started at Summerhill Pyramid winery and eventually grew and opened his own winery, Kalala Organic Estate Winery.  Karnail opened Kalala to the public in July of 2008 and hasn’t looked back since, in fact, he only looks forward and at what more he can do!

In 2017, Karnail purchased the Mobile Juice Factory from Frank Deiter and then began his journey into organic fruit pressing.  He had mastered the art of pressing grapes into award-winning wines and now it was time to try his hand with all other kinds of fruit.

Karnail works best when he is challenged and this opportunity was one where he could learn something new while staying with his passion for organic fruits and organic fruit growing. He now travels all across the Okanagan and BC with the Mobile Juice Factory, pressing all types of fruits from Apples to Peaches to Cherries and Blueberries.

Karnail can still always be found at Kalala Organic Estate Winery, with his Mobile Juicing line, willing to chat with anyone interested in learning about organic viticulture or fruit pressing.

Be sure to stop in and say hello! 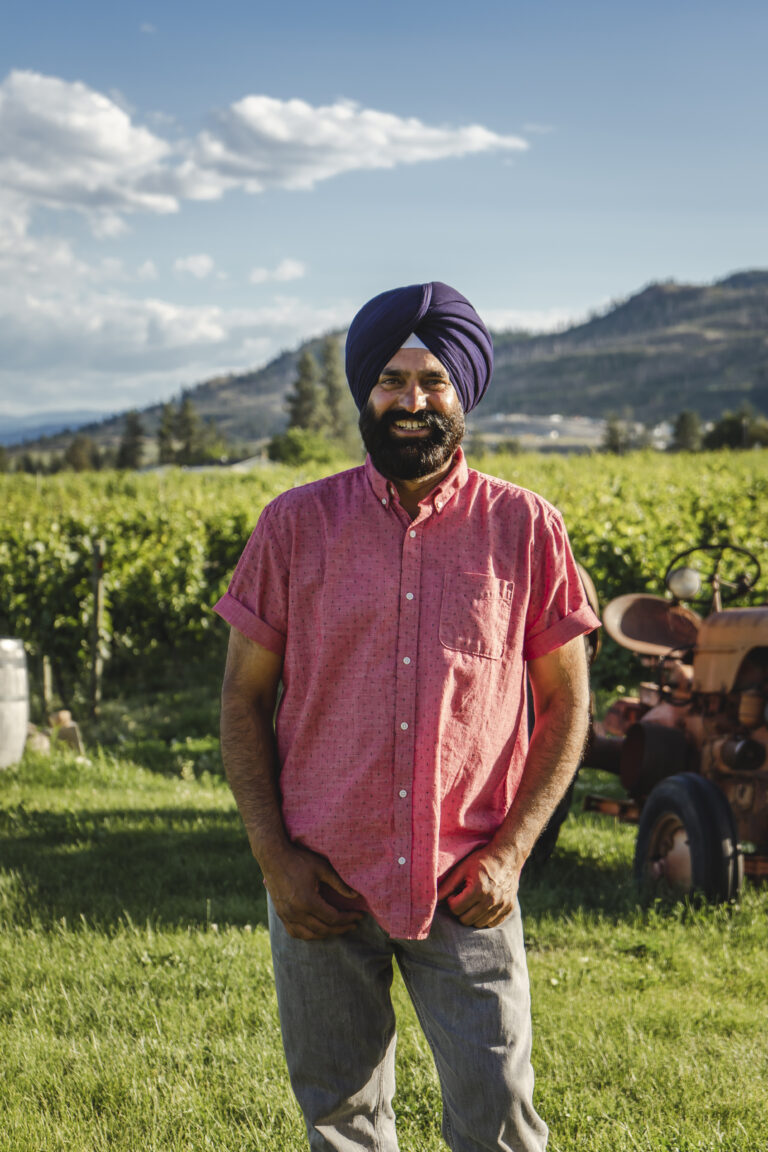 As a internationally recognized master distiller, Frank Deiter has been credited as “the man who kick-started modern craft distilling in BC”.  Frank created award-winning fruit liqueurs when he launched Okanagan Spirits.  He also knew that tons of the valley’s apples, pears and cherries were getting thrown out each season.

For years, he wondered, what else can we do to use this fruit?

Frank, a German native who moved to Vernon in 1999, thought back to his roots: the meadow orchards.  In the German countryside, farmers use the wide boughs of the alkmene apple trees to shade cattle through summer.  In the fall, the neighbours gather together, with the fruit from their meadow orchards, to make apple juice.  It’s a post-harvest party that lasts well into the night.

And so, the idea for the Mobile Juice Factory was born.  Months later, Deiter was standing in front of a trailer, custom-built with the latest technology, the highest quality stainless steel and the finest European craftsmanship. In an hour, that equipment would turn 1,760 pounds of apples into 500 litres of fresh and flavourful pasteurized juice.

The Mobile Juice Factory has been successful in so many ways.  It gives growers the chance to earn extra revenue from fruit that otherwise would have gone to waste.  It gives people in the community the chance to drink delicious, locally produced juice, squeezed right before their eyes

The Mobile Juice Factory is committed, for the benefit of its customers, shareholders and employees, to be the preferred supplier of dedicated custom juicing services in the industry.

We share a strong sense of community and environmental responsibility. We are dedicated to the farmers and fellow community members we work with to reduce food waste and improve local food economies. The Mobile Juice Factory strives to provide a topnotch service and a high-quality eco-friendly product.